Preparing for the unexpected: sinkholes

Sinkholes can seem to appear from nowhere

When sinkholes appear, threatening to swallow cars and buildings, they can be quite bizarre phenomena and often hit the headlines. A great example was reported a few years ago, when a huge sinkhole appeared over night in St Albans, Hertfordshire. Fortunately the hole, which measured 10m deep and appeared in the middle of a residential area, didn’t cause the collapse of any buildings. Apparently, the area is a former clay pit site and the most likely explanation for the phenomena was chalk excavation in the bedrock beneath the clay. 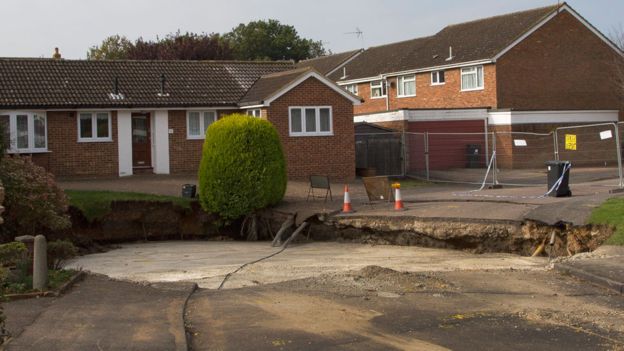 Investigators studying the sinkhole believe that there is a much larger void underneath and there are likely to be many others in the vicinity.

The depressing news for homeowners in the area is that their homes may be at risk of sudden collapse at any time and they are responsible for any remedial work under their homes.

Sinkholes can develop where previous mining has took place, leaving holes deep underground and a certain amount of instability in the ground. With time, there is always the chance that the surface ground will collapse to fill the void.

While the phenomenon has always occurred across the globe, the UK has definitely seen an increase in recent years. Why? When water sinks into the ground it can encounter certain materials which then dissolve. The disintegration of this deeper land coupled with the increased weight of the surface ground can naturally lead to a collapse and there you have it–another sinkhole. There has been an increase in rainfall in recent years, which has led to a higher risk of collapse even in areas where no mining has taken place. This video illustrates the phenomenon very clearly and also shows some shocking footage of sinkholes from around the world.

How do I know if my house it at risk?

There is no such thing as a ‘sinkhole’ search however your conveyancer can undertake a thorough ‘environmental search’ to highlight risk factors but you must request this. After all, most of us don’t buy a home to live in for just a couple of years and the mortgage term will typically cover a 25-year-period; plenty of time for a sinkhole to develop.

An effective environmental search will uncover areas where extensive mining has taken place. These areas will be littered with underground voids. The search will also look for certain geological signatures–substances such as lime that are more likely to dissolve in water, coupled with surface materials such as clay which will become heavier and worn down over time.

For example, the prevalence of gypsum in Ripon, North Yorkshire, means that there is a whole labyrinth of voids underground. Gypsum can dissolve quicker than limestone and in March 2014, a sinkhole measuring 7.5m wide caused the collapse of a 100-year-old house and the evacuation of several families in Ripon.

Needless to say, areas where sinkholes are known to have occurred should be highlighted as part of any decent environmental search.

Risk of sinkholes. Now what?

Well it is up to you whether you buy a property in a high risk area although it would be wise to ensure your home insurance covers you for the risk. Insurance policies will vary. For example, many will not cover you for a sinkhole that appears in your garden if it is not directly affecting the foundations of your home.

It is always best to approach a broker for your insurance, as opposed to trying to put it in place yourself through popular money saving websites. The old adage ‘you get what you pay for’ certainly applies to insurance.

Ensure that you have a policy which has a defaqto rating of between four and five, as this will confirm that they are a reputable company.

The bottom line is that a home is a serious long term investment and employing a highly competent and thorough conveyancer to make sure you are not buying a future headache is worth every penny. We are experts in conveyancing. If you have your eye on a property now, give us a quick call today so we can make sure all the T’s are crossed and all the I’s are dotted.